NOTE: the colour input described here is no longer part of shinyjs and is now available in the colourpicker package instead.

I don’t always think Shiny is missing anything, but when I do - I fill in the gap myself.

That was meant to be read as The Most Interesting Man In The World, but now that I think about it - maybe he’s not the type of guy who would be building Shiny R packages…

Shiny has many useful input controls, but there was one that was always missing until today - a colour picker. The package colourpicker now offers a colourInput() function and, of course, a corresponding updateColourInput(). There have been many times when I wanted to allow users in a Shiny app to select a colour, and I’ve seen that feature being requested multiple times on different online boards, so I decided to make my own such input control.

Click here for a Shiny app showing several demos of colourInput. If you don’t want to check out the Shiny app, here is a short GIF demonstrating the most basic functionality of colourInput.

The colours of course don’t look as ugly as in the GIF, here’s a screenshot of what a plain colourInput looks like. 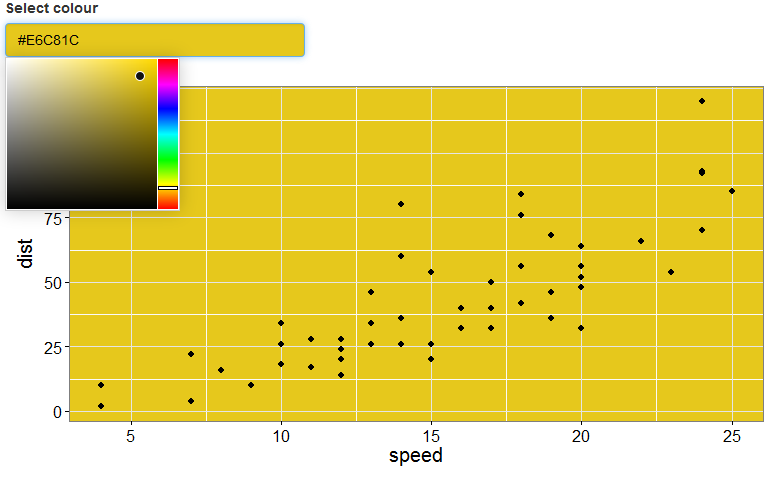 colourInput() is available in colourpicker. You can either install it from GitHub with devtools::install_github("daattali/colourpicker") or from CRAN with install.packages("colourpicker").

Using colourInput is extremely trivial if you’ve used Shiny, and it’s as easy to use as any other input control. It was implemented to very closely mimic all other Shiny inputs so that using it will feel very familiar. You can add a simple colour input to your Shiny app with colourInput("col", "Select colour", value = "red"). The return value from a colourInput is an uppercase HEX colour, so in the previous example the value of input$col would be #FF0000 (#FF0000 is the HEX value of the colour red). The default value at initialization is white (#FFFFFF).

Since most functions in R that accept colours can also accept the value “transparent”, colourInput has an option to allow selecting the “transparent” colour. By default, only real colours can be selected, so you need to use the allowTransparent = TRUE parameter. When this feature is turned on, a checkbox appears inside the input box.

By default, the text of the checkbox reads “Transparent”, but you can change that with the transparentText parameter. For example, it might be more clear to a user to use the word “None” instead of “Transparent”. Note that even if you change the checkbox text, the return value will still be transparent since that’s the actual colour name in R.

This is what a colour input with transparency enabled looks like

How the chosen colour is shown inside the input

If you want to only allow the user to select a colour from a specific list of colours, rather than any possible HEX colour, you can use the palette = "limited" parameter. By default, the limited palette will contain 40 common colours, but you can supply your own list of colours using the allowedCols parameter. Here is an image of the default limited colour palette. 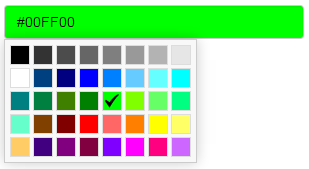 Specifying a colour to the colour input is made very flexible to allow for easier use. When giving a colour as the value parameter of either colourInput or updateColourInput, there are a few ways to specify a colour:

Works on any device

If you’re worried that maybe someone viewing your Shiny app on a phone won’t be able to use this input properly - don’t you worry. I haven’t quite checked every single device out there, but I did spend extra time making sure the colour selection JavaScript works in most devices I could think of. colourInput will work fine in Shiny apps that are viewed on Android cell phones, iPhones, iPads, and even Internet Explorer 8+.

In order to build colourInput, I needed to use a JavaScript colour picker library. After experimenting with many different colour pickers, I decided to use this popular jQuery colour picker as a base, and extend it myself to make it geared to work with Shiny. I simplified much of the code and added some features that would make it integrate with Shiny much easier. You can see the exact changes I’ve made in the README for my version of the library. The main features I added were the support for a “transparent” checkbox, the complete look of the input field was redesigned, and I also changed the colour picker colours to render completely in CSS instead of using images.

The colour picker functions were initially developed in the shinyjs package but it has been pointed out by many people that these functions are not exactly in-line with the general shinyjs idea, so they eventually graduated into the colourpicker pacakge.

If anyone has any comments or feedback, both negative or positive, I’d love to hear about it! Feel free to open issues on GitHub if there are any problems.