shinyjs is my second R package that managed to find its way past the CRAN review process. It lets you perform common useful JavaScript operations in Shiny applications without having to know any JavaScript.

The package has improved a lot since writing this post. I highly recommend you stop reading this page and instead go the shinyjs website.

You can check out a demo Shiny app that lets you play around with some of the functionality that shinyjs makes available, or have a look at a very basic Shiny app that uses shinyjs to enhance the user experience with very minimal and simple R code.

shinyjs is available through both CRAN (install.packages("shinyjs")) and GitHub (devtools::install_github("daattali/shinyjs")).

Shiny is a fantastic R package provided by RStudio that lets you turn any R code into an interactive webpage. It’s very powerful and one of the most useful packages in my opinion. But there are just a few simple pieces of functionality that I always find missing and I implement myself in my Shiny apps using JavaScript (JS) because it’s either not supported natively by Shiny or it’s just cleaner to do so. Simple things like showing/hiding elements, enabling/disabling a button, showing a popup message to the user, manipulating the CSS class or HTML content of an element, etc.

After noticing that I’m writing the same JS code in all my apps, and since making Shiny talk to JS is a bit tedious and annoying with all the message passing, I decided to just package it to make it easily reusable. Now I can simply call hide("panel") or disable("button"). I was lucky enough to have previous experience with JS so I knew how to achieve the results that I wanted, but for any Shiny developer who is not proficient in JS, hopefully this package will make it easy to extend the power of their Shiny apps.

Check out the demo Shiny app to see some of these in action, or install shinyjs and run shinyjs::runExample() to see more demo apps.

You can view the final Shiny app developed in this simple example here.

Suppose we want to have a simple Shiny app that collects a user’s basic information (name, age, company) and submits it, along with the time of submission. Here is a very simple implementation of such an app (nothing actually happens when the user “submits”).

Note that I generally don’t like running Shiny apps like this and prefer to declare the UI and server separately, but I do it like this here for brevity. 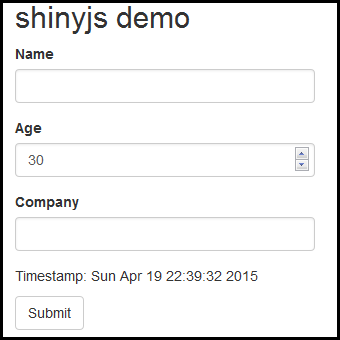 Now suppose we want to add a few features to the app to make it a bit more user-friendly. First we need to set up the app to use shinyjs with two small changes

Here are 6 features we’ll add to the app, each followed with the code to implement it using shinyjs:

1. The “Name” field is mandatory and thus the “Submit” button should not be enabled if there is no name

In the server portion, add the following code

Or instead you can use the toggleState function and pass it a condition:

You can use the optional condition in some other functions as well, which can be very useful to make your code shorter and more understandable.

2. The “Age” and “Company” fields are optional and we want to have the ability to hide that section of the form

First, we need to section off the “Age” and “Company” elements into their own section, so we surround them with a div

Lastly, we need to tell Shiny to show/hide the section when the link is clicked by adding this code to the server

3. Similarly, since we don’t really care about “Age” and “Company” too much, we want to hide them initially when the form loads

Simply surround the section we want to hide initially with shinyjs::hidden

4. The user should be able to update the “Timestamp” in case he spends way too long filling out the form (not very realistic here, and the timestamp should ideally be determined when the button is clicked, but it’s good enough for illustration purposes)

First, we need to add an “Update” link to click on, and we need to give the element showing the time an id so that we can refer to it later when we want to change its contents.

5. Some users may find it hard to read the small text in the app, so there should be an option to increase the font size

First, we need to add checkbox to the UI

In order to make the text bigger, we will use CSS. So let’s add an appropriate CSS rule by adding this code to the UI

Lastly, we want the text to be big or small depending on whether the checkbox is checked by adding this code to the server

Or, again, we can use the toggleClass function with the condition argument:

6. Give the user a “Thank you” message upon submission

Simply add the following to the server

You can view the final app here.

It is possible to achieve a similar behaviour to hide and show by using shiny::conditionalPanel, though I’ve experienced that using conditionalPanel often gets my UI to a messier state. I still use conditionalPanel sometimes for basic use cases, but when there is some logic involved in hiding/showing, I find it much easier to move that logic to the server and use hide/show. I also think it’s generally a better idea to keep most of the logic in the server, and using conditionalPanel violates that rule.
Implementing the shinyjs::toggle or shinyjs::hidden behaviour with pure Shiny is also possible but it also results in messier and less intuitive code.

The shinyjs::html function can be used to change the text inside an element by either overwriting it or appending to it. I mostly intended for this function to be used to change the text, though it can also be used to add HTML elements. There are many Shiny functions that allow you to change the text of an element. For example, renderText is used on a textOutput tag and updateTextInput is used on a textInput tag. These functions are useful, but sometimes I like to be able to just cange the text of a tag without having to know/specify exactly what it was declared in the UI. These functions also don’t work on tags that are not defined as reactive, so if I just have a p(id = "time", date()) it would be impossible to change it. I also don’t think it’s possible to append rather than overwrite with Shiny, and you can’t use HTML unless the element is declared as uiOutput or something similar.

There is something to be said about the fact that the pure Shiny functions are safer and more strict, but I personally like having the extra flexibility sometimes, even though the html function feels like it doesn’t really follow Shiny’s patterns. I still use the Shiny functions often, but I find html useful as well.

The onclick function was initially written because I wanted a way to click on a button that will cause a section to show/hide, like so:

RStudio very recently published an article describing several design patterns for using buttons, and from that article I learned that I can do what I wanted with observeEvent:

When I first discovered this, I thought of removing the onclick function because it’s not useful anymore, but then I realized there are differences that still make it useful. observeEvent responds to “event-like” reactive values, while onclick responds to a mouse click on an element. This means that observeEvent can be used for any input element (not only clickable things), but onclick can be used for responding to a click on any element, even if it is not an input tag. Another small feature I wanted to support is the ability to overwrite vs add the click handler (= R code to run on a click). This would not be used for most basic apps, but for more complex dynamic apps it might come in handy.

There are several improvements I still want to provide, but the biggest thing on my TODO list is to easily allow users to extend shinyjs. This would mean that you could just write a JavaScript function, tell shinyjs where to find it, and then shinyjs will do some magic to let you call that function as if it was regular R code.

If anyone has any suggestions or feedback, I would love to hear about it. If you have improvements, feel free to make a pull request. I’d like to give a special thanks to the Shiny developers, especially Joe Cheng for always answering all my Shiny questions.